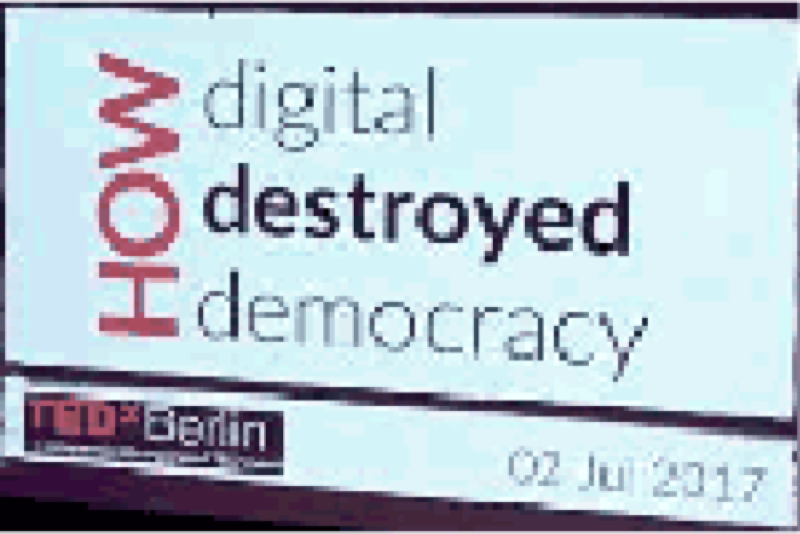 TED talks became a bit like the ten biblical plagues crossbred with Genesis 1:28 (be fruitful, and multiply) and a strictly enforced scripted reality TV format: the plentitude of mandatory upbeat ideas worth spreading has even been infecting non-TED talks, some talked about ideas are strictly chemtrails for academics, many the presenters with their trained TED-stage personalities are almost as bad as the cloned startup pitchers churned out by the countless accelerators.

Still, I went to TEDx BerlinSalon on Democracy. And, really, it was worth it. Mostly because of one talk. Lawrence Lessig on HOW DIGITAL DESTROYED DEMOCRACY (not yet posted).

In the 19th century, the fragmentation of media was mostly defined by locality. Local competition, of it existed, may have been fierce – but, due to the immense CAPEX and OPEX was quite limited.

In the 21st century, media has morphed into opinion factories with potentially global reach. The limiting resources aren’t capital or allocable spectrum, but our limited attention span. Polarization not only shouts for attention, it does it by playing towards our tribal instincts. Us vs. them is the cheapest way to create a pretend-relationship – but comes at a price: it becomes a problem for democracy.

Lessig’s case is quite convincing. By locking tribes into micro-medial echo chambers, our societies loose their connecting tissue. We, the people, make sense about our surroundings, our lifes by story telling. That’s why media matters. Media is about helping us to connect the dots. And, compared to other ways, like a preaching every Sunday in a church, media scales very, very well – making it a core building block of societies comprised of millions and millions of people.  But if this building block is converted into trans-local tribalism, the effects are noticeably bad. 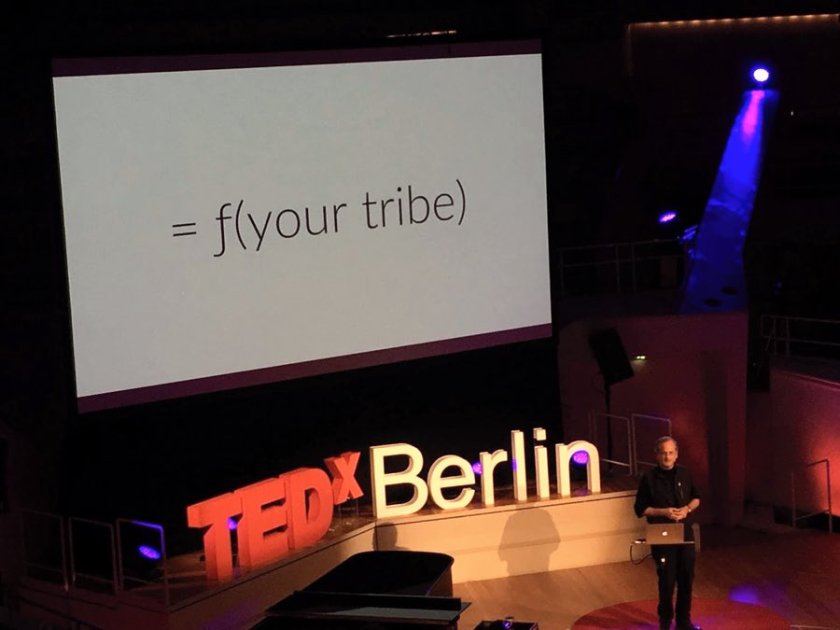 In true TED spirit, he had to attach a potential way out of the bleak conundrum we’re finding ourselves in. As there’s no way back to the broadly shared virtual fireplaces of 20th century broadcasting, he’s pointing towards a different democratic approach. His example: how Mongolia’s civil society is integrated into the political decision making process, thereby creating the missing “we” …

Lessig is brilliantly connecting the dots. But do I really subscribe to his diagnosis? Is it really the side-effects of digital, which are destroying democracy? Let’s not forget: the uniting factor of broadcast media is a quite double-sided sword. Nazi-Germany used their central control over broadcasting (and all other media) to destroy democracy quite effectively.

Granted: the ugly underbelly of the Internet is, yes, ugly. The bile of astroturfed tribes is poisoning all political conversations. Volume and frequency of the ugliness are deafening. But the tonality ain’t new.

Look at graffiti in Pompeji:

All the deadbeats and Macerius ask for Vatia as aedile.

Try the Lutheran Insulter, spouting out Martin Luther’s most over the top insults:

Even if the Antichrist appears, what greater evil can he do than what you have done and do daily?

For sure, the fake-media engines spouting partisan insults are not helping. Some of them are even directly based on Lessig’s diagnosis of same facts, different understanding. There are site operators catering to audiences to the right AND the left, reusing the same content, just changing a couple of words to change the bias.

But same facts, different understanding is the natural realm of the spinmeisters framing the story around the facts according to their paymaster’s needs, from climate change to tobacco smoke to gun control to however larger or small the issue may be.

Consequently, facts seem to have lost all meaning. If you can’t spin it, just use alternative facts.

But maybe the killer of the WE is not us living in our filter bubbles. Otherwise, the bile of Facebook comments and Twitter replies would not exist. In our modern technocracies, the WE is reduced to an incremental HOW.

Media, be it digital or printed or broadcasted, is always an echo chamber. Only resonating messages are amplified. By default, technocracy has no message to relay. Look at the EU. A war-torn continent uniting itself, a mind-boggling political project if there ever was one. A decade of populist onslaughts may well have ended in the demise of it. Was this driven by digital fragmentation? Most likely not.

Since ages, British print tabloids are masters of polarization. Pushing for BREXIT came as a natural to them (digital? well, not really.). 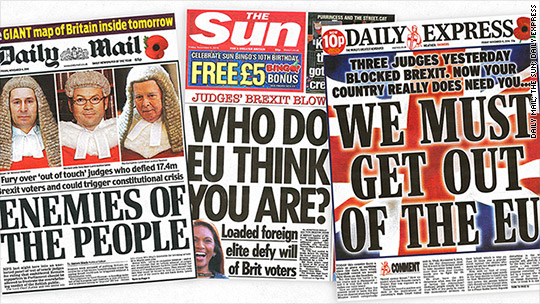 The most relevant effect as of so far for the EU: it’s finally finding a WE. For now, the populist successes of BREXIT and Trumpism is drawing Europe closer together, opening political talks way beyond the technocratic.

In the US, the situation is a bit different. The flag-waving WE was way to weak to cover the structural imbalances any longer.

Successful populists leverage any kind of media. The Commander in Tweet is not the result of a development in communications technologies.